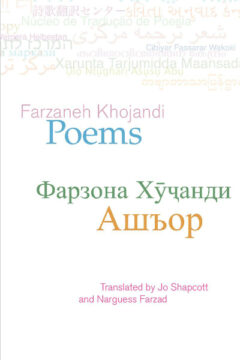 Back Again is featured in Farzaneh Khojandi Chapbook.
Buy now

The messenger of hope
died halfway along the road.
he had to travel all the way
from the beauty of beginnings,
his small presence
speaking virtue, goodness and purity.
His poems were a rocking cradle:
they poured sounds into my life again,
poured sounds, poured desires.
They helped me break away from evil eyes,
damning glances and false friendships,
I was rinsed instead by a bright spring.
But my messenger of hope
died halfway along the road.
My indigo veins were charged with cold:
I flew to the depths of a crystal corridor.
Voluminous icebergs
slept in geometries of silence,
dead blocks of ice.
Only my soul moved:
sometimes it would smash
against the walls of the corridor
and sometimes it flowed
through the big freeze.
Sad journey.
But I thought
if
I opened like a flower in the warmth
I’d meet enemies disguised as friends,
face betrayal all over again.
And I’d carry glowing pearls
to friendly parties
and bring back darkness.
And I’d go looking for someone
in the December streets,
someone who’s not there.
All over again I’d come face to face
with an acquaintance
and hang a smile on my face.
All over again sincerity would crash
into deceit, a heart would crash into a rose,
kindness would crash into fury, truth
would crash into lies, life into mortality.
All over again I’d see the poor
returning empty-handed from the bazaar.
I’d see a child bring grey, second-hand
soap to sell at our door.  His grubby hands
open to reveal his pure palms.
O, if I should make it back from exploding
Shells and bullets I shall see life vibrating.
Small people, people whos instincts have shrunk,
will bring our home to its death
this home, which spreads across the dawn.
Bang!  Bang!  Bang!
You can’t escape the noise
When it’s in your own head.
When the shells explode, how can I talk love?
Through the crystal corridor of death, I had
a hard journey, and I wouldn’t have made it
without two clear voices calling for me,
if little hands hadn’t pulled me out.
My mother was there, somewhere.
There, meaning everywhere, everywhere
else, where the sincere dead live.
And noisy spring wanting every cell of me
all over again.
On the other side of the window, the old plane trees,
across the wintery road, were about to sprout.
Friends say: stop looking through a black porthole,
think dawn, and not night.
Look how the winter cold
Makes the birds loving, in a huddle under the roof.
Why do you see everything upside down?
Why call the moth a dove?
Even if you call the moth a dove
it’s nothing but a moth.
Let the moth be a moth again.
Let the sun carry on its luminous life.
Let every blade of grass see
The green truth in itself.  You
Have no right to spread despair,
To disseminate darkness,
To see evil,
To speak evil,
And no right to do evil.
You don’t even have the right
To laugh at a moth.
I’ll be back again
Just as branches bud again
On the old tree.  I’ll be back
Again, even though I know,
The light of patience has died
In the eyes of last night’s love,
Moved on.  I’ll be back again
To the narrow band of sunset
In your blue eyes, the narrow band.
The first time I wore a watch
My classmates complimented me
In that teenage way.  I didn’t know
Then, the galatic speed of watches.
Day and night, a pointless rush,
A gallop through emptiness.  I didn’t
Know that the seasons would come
Earlier and earlier, transformations
Would be so fast, the mirror’s eyes
Would open in amazement to see
So many changes in just one image.
Why does matter only move
In the direction of decay?
When I tied a band of flowers
To my hair everyone pointed,
Laughing: ‘she’s trying to stay young
With flowers’.  No, it’s not a simple
Hair decoration that grants youth.
Youth is inside, a light that stays on
Until late.  What I mean is you.
O love that has not given its soul yet!
O truth not yet discovered!
O old book on a forgotten shelf!
O desert of secrets crossed by thirsty souls!
They don’t know that Enoch’s spring
could gush if they dug deeper.
Do you know?  It isn’t possible
To walk in these alleyways
With the belief of a fourteen-year-old.
It isn’t possible to drive a horse and cart
To meet someone off the plane.
It isn’t possible to turn the cigarettes
On your lips to lollipops.
Drip, drip, drip.
Snow thaws in the gutters
Icicles on the roof corners
Fall off like old teeth.
A rook picks at a naked bone,
An invalid listens from a painful
Bed to singing in the street.
A child hands paper chains on its plastic
Pine-tree.  My friend says: the birds will die
Without you, come back!  And I will go back,
I will.

Other poems by Farzaneh Khojandi

Other poems in Tajik

Other poems from Tajikistan