‘Poetry in the Bay’ 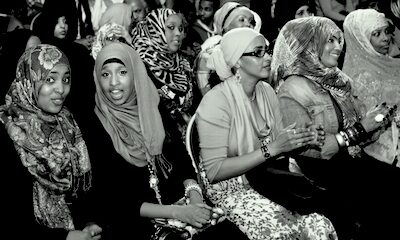 Coach D. I'm sitting opposite two of the world's greatest living poets. Gaarriye is pinching my salt and vinegar crisps. Farzaneh Khojandi is asking, through her friend and translator, Narguess Farzad, about Welsh place names. I am not being much help.

We're on our way to Cardiff for the second date on the World Poets Tour, a three-hander with Farzaneh, Gaarriye, and Choman Hardi, the Kurdish poet, translator and painter. The reading has been organised with Academi and the Cardiff Bay-Lit festival at Kemi's Cafe, opposite the Millennium Centre.

With a mischevious glint in his eye, Gaarriye starts to tell me that if you really want to learn a language the best way is to get a girlfriend who speaks it. 'Pillow talk is the best', he says, 'when all your nerves are open. When you are both high in the sky, tell her to whisper in your ear again'. He laughs and throws his hands wide.

'Then it will be printed in your memory.'

The cafe slowly fills up, until all the seats are occupied and there are a few people standing at the back. I introduce the poets one by one, confident that this Cardiff audience is about to witness something the likes of which they've never seen before.

Choman reads the poems of her friend Kajal Ahmad, and the beautiful cadences of the Sorani verse gently fill the room. I watch Gaarriye, who is paying close attention to the images of exile and persecution so subtly worked out in the allegories of Kajal's work.

Farzaneh reads next, her eyes raised upwards to the ceiling, as if she's nervous about this recital. It's typical of her enormous modesty, but the spellbinding rhythm of her words draws in her listeners. Persian is full of soft aspirated sounds: a language of tenderness. There is a biting wit in some of her lines, but she delivers them with the grace and poise of a ballerina.

And then it is time for Gaarriye. He stands jauntily, bending the book in his hand right back. He tells the audience what to listen for - the meter. His dynamism and confidence are electrifying. He fills the room with sweeps of his arms and with his booming delivery. The Somalis who have come to see him are in raptures. Their laughter punctuates the poem.

It has been a magical evening in the company of three very different poets. I don't think anyone who was there will forget it in a hurry.