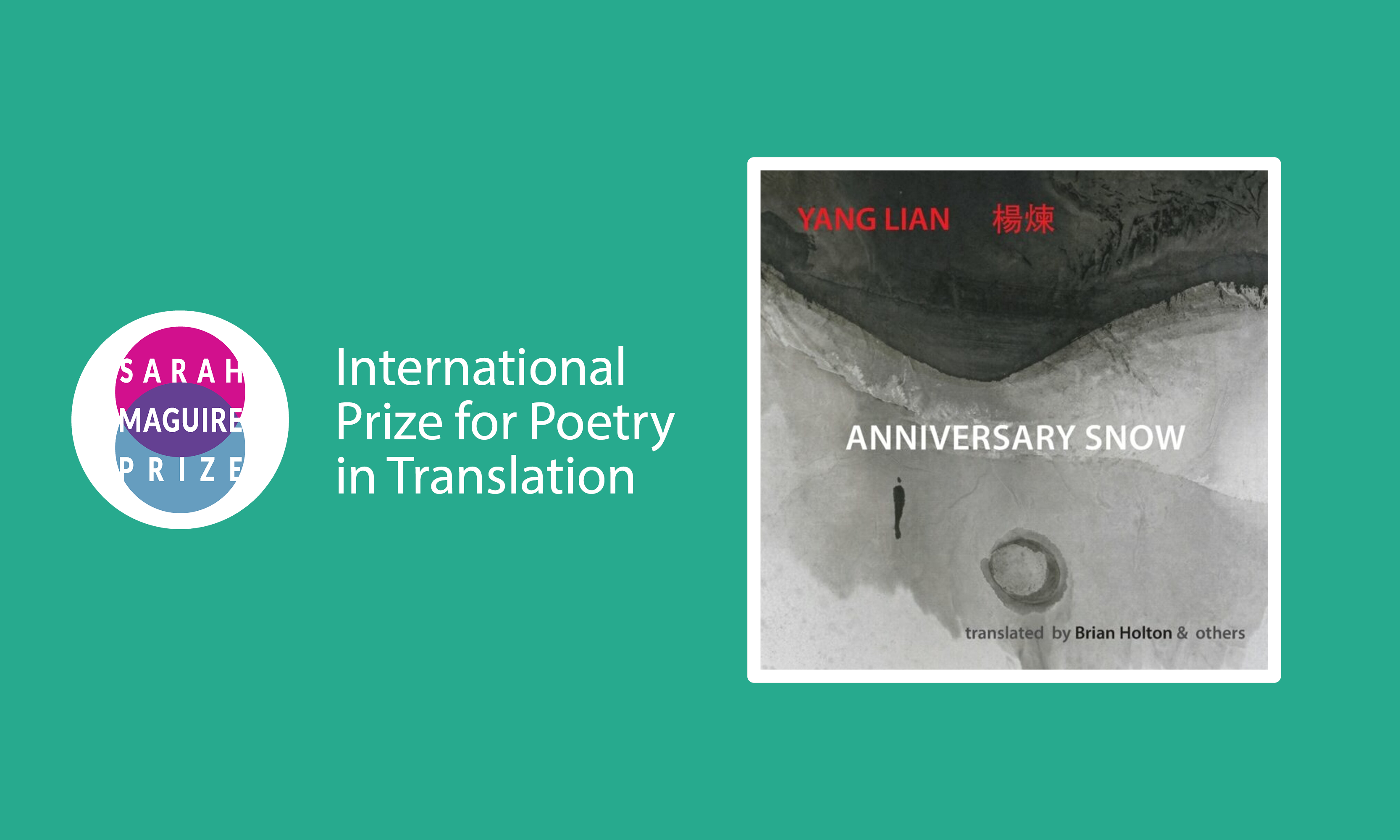 The winner was announced at an online event hosted by the Poetry Translation Centre on Thursday, 25th March 2021. The winning poet, Yang Lian, and his translators will share a prize of £3000.

“I think reading the poetry of other nations and other cultures is probably the best way to connect with other human beings on the deepest level – because poetry carries the innermost feelings as well as the intellectual endeavours of other cultures.” Said Poet and translator Alireza Abiz, who was the chair of the judging panel, “Poetry enriches the culture that is receptive to translation. In the UK, very often when we talk about underrepresented languages and cultures we try to depict poetry translation as giving voice to those cultures, which is true but ignores the fact that English culture and the English Language also benefits from translation. I hope that the Sarah Maguire Prize for Poetry In Translation can bring this value to the surface so we can appreciate the role translation has to play in enriching English language poetry.”

Of the winning title, the judges wrote: "The book is grounded in the historical roots of Chinese culture, poetry and art, but goes far beyond it, reinterpreting with poise and intelligence the very essence of our existence, from the changing landscape that surrounds us, the appeal of the natural world and the inner beauty of language, exemplifying its political force and its philosophical teachings.

Yang Lian was born in Switzerland in 1955, and grew up in Beijing. He began writing when he was sent to the countryside in the 1970s. On his return to Beijing he became one of the founders of the ‘Misty’ school of contemporary Chinese poetry. His poems became well-known and influential inside and outside of China in the 1980s, especially when his sequence ‘Norilang’ was criticized by the Chinese government during the ‘Anti-Spiritual Pollution’ movement. Yang Lian became a poet in exile after the Tiananmen massacre. Since that time, he has continued to write and speak out as a highly individual voice in world literature, politics and culture.

Brian Holton studied Chinese at Edinburgh and Durham: he has taught at both universities as well as at Newcastle, where he was the first director of the Translating & Interpreting programme; after that, he spent nine years teaching translation in Hong Kong.

He has published many translations of Chinese literature into English and into his native Scots, as well as articles and essays on translation. Beginning in 1994, he has translated several books by the poet Yang Lian.

W. N. Herbert is a poet who writes in both English and Scots and was one of the writers involved in the Informationist poetry movement that emerged in Scotland in the 1990s. He is a Professor of Poetry & Creative Writing at Newcastle University and Dundee's first makar.

Lizhen Liang is a Chinese poet, translator, filmmaker, editor and art curator based in China. She works in an international and trans-disciplinary context, focusing on creating and promoting contemporary poetic art and visual art.

Pascale Petit is a French-born British poet. She trained as a sculptor at the Royal College of Art. Four of her collections have been shortlisted for the T. S. Eliot Prize and her seventh, Mama Amazonica, won the inaugural Laurel Prize for Poetry in 2020, and the RSL Ondaatje Prize.

Fiona Sampson is a British poet and writer. She is published in thirty-seven languages and has received a number of national and international awards for her writing. She has been the editor of Poetry Reviewer. Her own translations include the work of Jaan Kaplinski.

George Szirtes is a British poet and translator from the Hungarian language into English. Originally from Hungary, he has lived in the United Kingdom for most of his life after coming to the country as a refugee as a child. In 2016 he won the Chinese Poetry and People Prize.

Joshua Weiner is an American poet. He is the author of three books of poems, The World’s Room, From the Book of Giants, and The Figure of a Man Being Swallowed by a Fish and a book about the refugee crisis in Europe, Berlin Notebook: Where Are the Refugees?