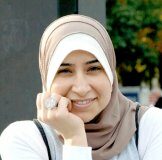 The Iraqi poet and critic, Worod Musawi, was born in Babylon, south of Baghdad, in 1981. At the age of ten she began writing poetry. That same year, in 1991, she left Iraq with her family for Iran where she studied at Almustafa University in the School of Arabic and Islamic law until 1997; she spent the following year teaching the Quran.

In 1998 she was forced to leave Iran for political reasons; she went first to Syria and then to the UK. In London, she continued her education in School of Oriental and African Studies, obtaining an MA in Arabic Literature in 2007.

Worod has published two collections of poems, Washmu A'aqarib (Scorpion's Tattoo) in 2007 and ; Hal Ataa (It Has Come!) in 2010, and a volume of her short stories, What the Bullet Whispered to the Head, is forthcoming. She has also published a number of critical essays on Arabic poetics.