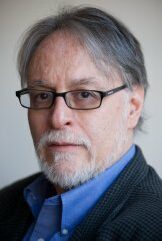 David Huerta was born in Mexico City in 1949. He is one the leading poets of the generation that first came to prominence during the 1970s in Mexico. He published his first book of poems, El Jardín de la luz [The Garden of Light] (1972), while still a student in the Faculty of Philosophy and Arts at Mexico's Autonomous National University (UNAM). It has been followed by numerous collections, among them: Cuaderno de Noviembre [November Notebook] (1976), Huellas del civilizado [Traces of the Civilized] (1977), Versión [Version] (1978), El espejo del cuerpo [The Mirror of the Body] (1980) and Incurable [Incurable] (1987), a long poem in nine parts that encourages the reader to participate in constructing the meaning of the poem.

Aside from his poetry, David Huerta has translated works from Italian and English, and is an editor of the Mexican publishing house Fondo de Cultura Económica. He writes a column for the Mexican weekly Proceso, and teaches literature at the Universidad Autónoma de México. His latest book, El correo de los Narvales, is dedicated to the work of Pablo Neruda.

In 2006 David Huerta was awarded the prestigious Xavier Villaurrutia Prize for the new edition of Versión and for his lifelong contribution to Mexican literature. He is an active member of the Sistema Nacional de Creadores.