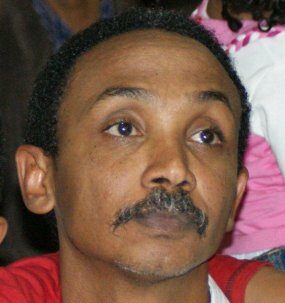 Ateif Khieri is one of the most highly regarded Sudanese poets of his generation. Born in Karima in northern Sudan in 1967, he moved to Khartoum in 1986 to study Drama at Sudan University. He became actively involved in the city's then thriving theatres, quickly gaining acclaim for his work as an actor and director.

Ateif first came to prominence as a poet shortly after the coup that brought the dictator, Omar El-Bashir, to power in 1989. At great risk to himself, alongside his close friend, fellow poet, Al-Saddiq Al-Raddi, Ateif took part in a series of underground poetry readings in defiance of the Islamist authorities and their brutal crackdown on any signs of opposition or resistance.

As a result of his opposition to the regime, Ateif found it impossible to find regular work in Sudan and he left the country to live in Libya and then Egypt. From time to time he would return home for brief periods when he took part in enthusiastically received poetry readings and to direct and act in plays. Eventually he decided he could no longer live in Sudan and so, since 2002, Ateif has lived in exile in Australia.

Ateif has published three highly-regarded collections of poetry, Script of Earth (1995), Suspicions (1999) and Heartening Country Women (2006). He is also the author of two plays, Master in Exile (performed in Sudan in 1996) and Dancing in the Museum (performed in Melbourne, Australia, 2006).