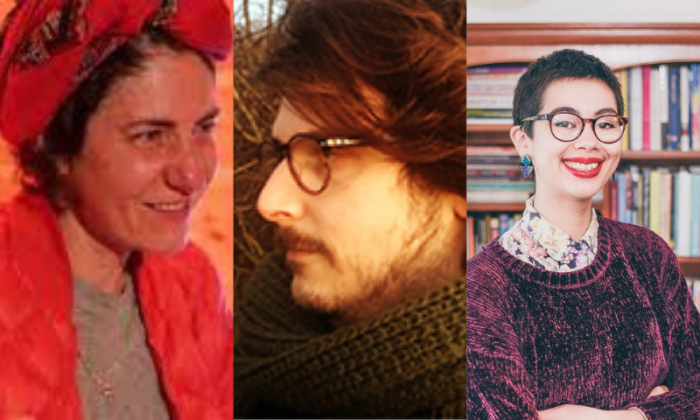 For the third workshop in our ‘Translating Lewisham’ series, we will be exploring the work of the Brazilian poet Érica Zingano with long-time PTC guest translator Francisco Vilhena. Érica is a visual artist and performer as well as a poet, and her work explores the idea of living between languages and states of self. Poet Helen Bowell will be facilitating.

There is no need to know the language being translated, just come along!

Érica Zíngano was born in 1980 in Fortaleza-Ceará, Brazil. She received a Master’s in Portuguese Literature at the Universidade de São Paulo in 2011, and then she moved to Europe, to Portugal, where she began a Ph.D in Literary Studies – Portuguese Studies at the Universidade Nova de Lisboa. Her work revolves around poetry and sometimes visual arts, and she has been exploring the enunciation of poems in performative actions. In 2013, hochroth Berlin published the two versions of her book Ich weiß nicht warum – Zeichnungen und Texte für Unica Zürn [I Don’t Know Why – Drawings and Texts for Unica Zürn], translated into German by Odile Kennel. In 2017 she published eine Sache für eine andere [A thing for another (and another one too)] by bulky news press, with Lotti Thießen, Nathalie Quintane, Marion Breton, Rob Packer, Odile Kennel, Mercedes M. and Marília Garcia. During 2018, Érica was one of the six foreign writers selected to receive funding from the State of Berlin (Senate Department for Culture and Europe): ‘Arbeitsstipendien nichtdeutschsprachige Literatur’.

Francisco Vilhena is an editor and translator. His work can be found in Modern Poetry in Translation, Granta, Asymptote and elsewhere. He has served as bridge translator on several PTC translation workshops and his co-translation of Adelaide Ivánova's the hammer and other poems alongside Rachel Long was shortlisted for the 2019 Derek Walcott Prize for Poetry. His cat is one of the first feline polyglots.

Helen Bowell is London-based poet and co-director of Dead [Women] Poets Society. In 2020, she co-guest-edited an issue of Modern Poetry in Translation (focus on dead women poets). She is a Ledbury Poetry Critic, and an alumna of The Writing Squad, Roundhouse Poetry Collective, London Writers Awards and London Library Emerging Writers programme. Her debut pamphlet The Barman was published by Bad Betty Press in 2022. She works at The Poetry Society.

You can attend our Translating Lewisham workshops for free via Lewisham’s Social Prescribing service. Social prescribing helps to improve your well-being by connecting you to non-medical support in the community. To refer yourself or someone else to the service head over to the One Health Lewisham website and fill in a simple form.

This project is supported by the Lewisham Borough of Culture scheme, a year-long programme of events that puts Lewisham and its community in the spotlight, focusing on the themes of diversity and climate change, encouraging locals and visitors to take action.

You can get a great value season pass giving you access to all eight workshops in our Translating Lewisham series at a lower price: £110.00 for general admission or £70.00 concession for students, the unwaged or Lewisham residents. The discount means you will be getting on workshop for free.

Get your season pass here.

See all events in: Translating Lewisham