This October we are celebrating the publication of 'Negative of a Group Photograph', a new collection of poetry by Farsi poet Azita Ghahreman, with an national tour.

Azita Ghahreman, is one of Iran's leading poets and has lived in Sweden since 2006. Her poems directly address questions of female desire and challenge the accepted position of women. The PTC first published Ghahreman's work in 2012 when she came to the UK as part of our Persian Poets’ Tour. We are delighted to bring her back for a series of events across the UK this October to celebrate her latest collection.

Negative of a Group Photograph runs the gamut of Ghahreman’s experience: from her childhood in the Khorasan region of south-eastern Iran to her exile to Sweden, from Iran's book-burning years and the war in Iraq to her unexpected encounters with love.

The poems in this illuminating collection are brought to life in English by the poet Maura Dooley, working in collaboration with Elhum Shakerifar.

Azita Ghahreman is the author of five collections of poetry, Eve’s Songs (1991), Sculptures of Autumn (1995), Forgetfulness is a Simple Ritual (2002), The Suburb of Crows (2008) and Under Hypnosis in Dr Caligan’s Cabinet (2012). In 2013 she was a recipient of Swedish PEN’s Prince Wilhelm Award. Russian and Ukrainian translations of her poems were awarded the Udmurtia Russian Academy’s Ludvig Nobel Prize in 2014. She was born in Mashhad in 1962 and has lived and worked in Sweden since 2006.

Maura Dooley’s most recent poetry collections is The Silvering (2016). Her work has been shortlisted for the T.S. Eliot Prize and the Forward Prize and received both an Eric Gregory and a Cholmondley Award. She teaches at Goldsmiths College, University of London and is a fellow of the Royal Society of Literature.

Elhum Shakerifar studied Persian Literature at Oxford University. She is a BAFTA-nominated producer and curator of film, and 2017 recipient of the Women in Film & Television Award for her documentary work.

The Mosaic Rooms - Negative of a Group Photograph London Launch 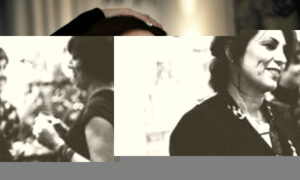 SOAS - An evening of Farsi poetry with Azita Ghahreman

Price - Free but you need to register