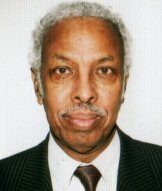 A founding member of Somali P.E.N. Centre (an affiliate member of International P.E.N. World Association of Writers), and its vice-president until 2010, Said Jama Hussein is a well known Somali scholar who is actively engaged in the promotion of the Somali language and its literature.

Said Jama is a regular contributor to the two highly popular cultural events, London's Somali Week Festival and the Hargeysa International Book Fair respectively. He is fluent in English, Arabic and Somali and currently heads the translation section of the Redsea-online Cultural Foundation.

Said Jama is married and lives with his family in London.