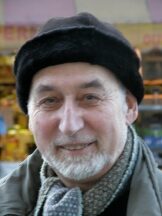 He works as a humanistic groupworker grounded in the systems approach. While practicing in London, he received his PhD from the LSE and also qualified as a counsellor and a social worker. An academic career followed. He was very fortunate to have been a piano pupil of Galila Yizreeli-Ruebner during his adolescence. Indeed, to this day, he can't help approaching each poem as if it is a musical composition.

Oded retired in 2003 and is learning to work with glass while still writing about groupwork.