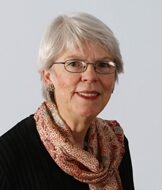 Carole Satyamurti is a poet and sociologist. She published three volumes of poetry with Oxford University Press, of which the first and third were Poetry Book Society Recommendations: Broken Moon (1987), Changing the Subject (1990) and Striking Distance (1994). In 1998, OUP published her Selected Poems. Following the termination of the OUP poetry list, her fourth collection, Love and Variations, was published by Bloodaxe in 2000. Stitching the Dark: New and Selected Poems, appeared from Bloodaxe in 2005, and a new collection, Countdown, in 2011.

Until recently, she taught at the University of East London, and at the Tavistock Clinic, where her main academic interest was in the application of psychoanalytic ideas to an understanding of the stories people tell about themselves, whether in formal autobiography or in social encounters. She contributed to, and co-edited, with Hamish Canham, a collection of essays on the connections between poetry and psychoanalysis, Acquainted With the Night: psychoanalysis and the poetic imagination (Karnac, 2003).

Her poetry has been awarded a number of prizes. She won the National Poetry Competition in 1986. She received an Arts Council Writers