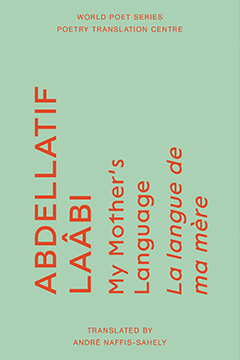 Abdellatif Laâbi is widely acknowledged to be Morocco's greatest living poet. For the last fifty years, he has produced works of unique philosophical and emotional insight that have been guided – above all – by a commitment to say what needed to be said. In 1972 this led to his arrest, torture and eight-and-a-half year imprisonment. This selection features some of his most powerful shorter poems alongside a long extract from his seminal work 'Casablanca Spleen'.

The poems in this edition have been translated by the celebrated poet and translator André Naffis-Sahely and include an afterword by the poet Yousif M. Qasmiyeh reflecting on poetic and ethical courage of Laâbi's work.

"Compelling and accessible, a superb introduction to Abdellatif Laâbi’s poetry, and I welcomed the succinct introduction, and the afterword by Yousif M. Qasmiyeh that provides essential contextual background to the poems."
– Josephine Corcoran, Modern Poetry in Translation