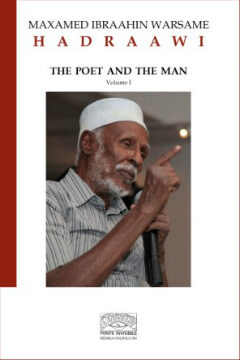 This title is currently unavailable to order while we await a reprint. Please check back soon or send an email to maddy@poetrytranslation.org to receive an update when it is available again.

Hadraawi: The Poet and the Man

Hadraawi: The Poet and the Man is the first selection of poems by the greatest living Somali poet, Maxamed Ibraahin Warsame 'Hadraawi', to be published in Somali alongside translations into English. This ground-breaking book was co-published by the PTC together with Redsea Cultural Foundation and Kayd Somali Arts and Culture, to mark Hadraawi being granted the prestigious Prince Claus Fund Award for his tireless promotion of peace and the outstanding quality of his poetry.

The poems featured in this book are translated by Maxamed Xasan 'Alto' and Said Jama Hussein, working closely with poet W N Herbert.

“ 'Society' is the first of the documented poems in the collection; it bespeaks the imminent fragmentation that was quickly engulfing the Somali society at the time of its composition. Hadraawi; in this poem; identifies lack of sagacity, blame, and greed as the major ills bedevilling his society; the resultant effect of these ills are therefore cowardliness, brutality, and disorderliness.
- Ubaji Isiaka Abubakar Eazy, Saxafi Media