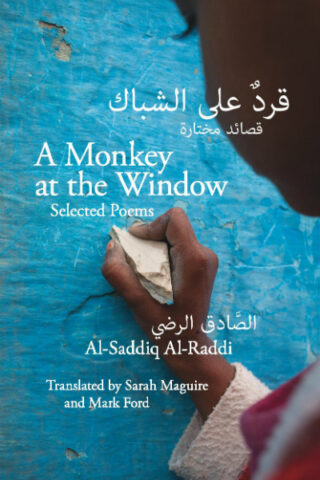 A Monkey at The Window: Selected Poems

Al-Raddi is one of the leading African poets writing in Arabic today. Famous in his native Sudan, the vivid imagery of his searing, lyric poems create the world afresh in their yearning for transcendence. A Monkey at the Window is a dual language collection made up of translations of Al-Saddiq Al-Raddi’s work by leading UK poets Mark Ford and Sarah Maguire. The volume incudes a translator’s introduction by Sabry Hafez illuminating the importance of Al-Raddi’s work within the Sudanese poetry tradition. A second essay ‘The Promise of Poetry’ by Sarah Maguire, founder the PTC, relates Al-Raddi’s life as a journalist and stadium filling poet superstar in Sudan under Omar al-Bashir’s regime.

"Connoisseurs of classical love poetry should seek out A Monkey at the Window, Sarah Maguire and Mark Ford’s selection from Al-Saddiq Al-Raddi, a Sudanese poet living in exile in London."
- Jeremy Noel-Tod, The Sunday Times