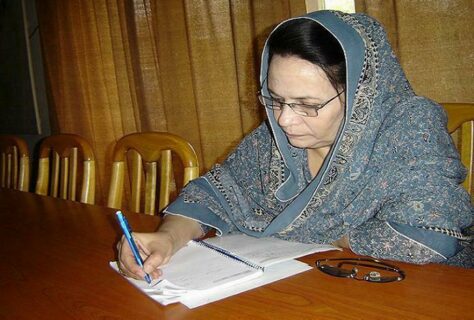 Parween Faiz Zadah Malaal is one of the most popular women poets writing in Pashto. Born in 1957, in Afghanistan’s southern Kandahar province, Parween Malaal got an education in her native city of Kandahar before graduating from Kabul University. She began her career as a journalist by writing for a prominent paper, Tolo-e-Afghan, published in Kandahar. Later, she started working in Kabul for Radio Afghanistan. Due to war and turmoil in Afghanistan, she, like many other Afghans, migrated to Pakistan where she lived as a refugee. Her husband, who was also a writer, died six years after their marriage in Peshawar where they lived as refugees. She also served as the Cultural Attache at Afghanistan's Consulate in Karachi, Pakistan. In addition to poetry, Parween Malaal has also published a collection of short stories in Pashto. Her poetry collections include, Da Khazaan Tilayee Ploona (Golden Footsteps of Autumn), Spozhmai pa Zangalzaar ki (Moon in the Jungle), and Da Aoushku Tasweer (Portrait of Tears).