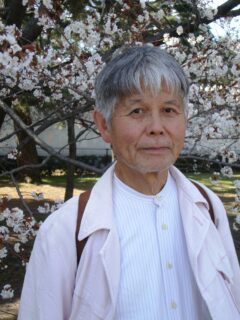 Mutsuo TAKAHASHI (born 1937) is one of Japan’s most prominent and prolific living poets, having won almost every major literary prize in the nation. Since first shocking the Japanese literary world with his bold poetic evocations of homoerotic desire in the 1960s, Takahashi has published several dozens of books of poetry and countless volumes of poetry, essays, and literary criticism. His poetry is known for its combination of erudition and dramatic imagery. In the last two decades, many of his books of poetry and essays reflect his lifelong engagement and study of ancient Greek and Roman literature and classical Japanese poetry. Five collections of his poetry are available in English translation: Poems of a Penisist (Chicago Review Press, 1975, reprinted University of Minnesota Press, 2012), A Bunch of Keys (The Crossing Press, 1984), Sleeping, Sinning, Falling (City Lights, 1992), On Two Shores (Dedalus, 2006), and We of Zipangu (Arc Publications, 2007).

Twelve Views from the Distance (University of Minnesota Press, 2012), his stunning memoir about growing up a gay, impoverished boy in rural southern Japan during World War II, was translated by Jeffrey Angles and was shortlisted for a Lambda Literary Award. Takahashi lives in the seaside city of Zushi, ten kilometers to the south of Yokohama. He takes long walks along the seashore and in the mountains every day, and spends his afternoons reading and thinking in his study.