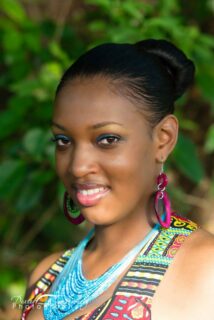 Hailing from the community of Mon Repos, Saint Lucia, Liz Faisal-Philip began writing poetry in her teenage years. The community, embedded in culture and cultural icons like Sessenne Descartes, shaped her identity, and the passion for it informed her appreciation the arts.

She has taken part in poetry slams across the island both English and Kweyol; as she writes in both languages. She won the first ever Kweyol poetry slam, founded by Alliances Francaises. She is a frequent performing poet at Headphunk, an active member of the St. Lucia writers forum, and has had the honour of performing at the St. Lucia Jazz and Arts Festival.

Liz’s writing is usually about social injustice, personal experiences and simple amusement. She writes in Kweyol in appreciation for the language and heritage, and for the superior expression she feels it has over English. She hopes her passion will inspire young writers, giving them the courage to express themselves creatively. She wants to be heard and to create a voice for those who lack the ability or freedom to speak expressively.