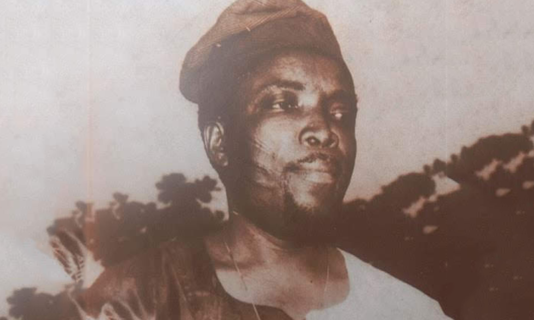 Ọláńrewajú Adépọ̀jù (also sometimes called "Lanrewaju Adepoju") is a Yorùbá poet, writer, intellectual, and religious leader from Nigeria, born in a village called Abà Òkè Pupa in Ọ̀yọ́ State of Nigeria, in 1940. An autodidact, he taught himself to read and write in Yorùbá and English. But his time spent with the griots (West African poets and storytellers) of his childhood gave him a vast knowledge of the Yorùbá verbal arts and culture that informed his mature work. He worked in a newspaper house as a proofreader, then became a poet, publishing a collection titled Ìrònú Akéwì in 1972, as well as a novelist, publishing Ládépò Ọmọ Àdánwò in 1975. The novel was later made into a movie in 2005.

However, it was as a poet that his talent first emerged and it earned him a spot on the air at the Western Nigerian Broadcasting Service. He was employed to perform poetry at dawn in a segment called Ìjíǹjí Akéwì (the poet's morning-song). He was one of the many poets of his generation who worked at that station. He later resigned (due to copyright demands by the station on his original work) to become an independent poet and record producer, publishing his spoken Yorùbá poetry directly to the public through record plates (vinyl), cassettes, and later CDs. He estimates he has released almost a hundred spoken-word ewì albums.

Adépọ̀jù is known primarily for his politically-charged poetry. He was, at different times, a poetic conscience for the Yorùbá-speaking nation, a scourge on politicians, an advocate for the masses, a religious leader whose poems often took on proselytizing characteristics, and eventually a spokesperson for politicians and administrators whose positions he supported. He was detained by military administrators for some of his activism. His insistent political positions lost him some of his supporters, but the talent behind his voice and words was never questioned. He is one of the most notable exponents of the ewì spoken-word poetry in Yorùbá, and one of the most influential voices in the genre.