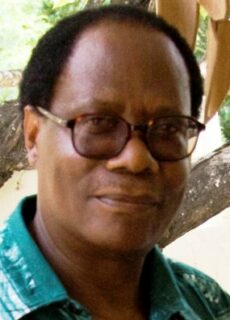 Euphrase Kezilahabi, Tanzanian poet, novelist, and scholar, is perhaps the most widely known and acknowledged contemporary Swahili author. He was one of the first African writers to publish a collection of free verse poetry in Swahili, and he has had a great impact on the development of the genre of the novel in Swahili.

Kezilahabi's first poem collection, Kichomi (Twinge) was published in 1974. Except for one poem (written in shairi metre) it is written in free verse and with modern content, dealing with topics traditionally regarded as taboos. The publication of Kichomi created a fiery debate on poetry as conservationists and modernists argued over whether free verse poetry can be called Swahili poetry. Traditionally, Swahili poetry was written by native Swahili speakers, Muslims living on the coast of East Africa. Suddenly there were some young university students from interior Tanzania, for whom Swahili was not their mother tongue and who wrote poems in Swahili in a way that no-one had before. The phenomenon was connected to a change in the body of Swahili speakers: instead of the language of a limited Muslim community living on the coast, as it had been, Swahili was becoming the lingua franca of the whole East Africa, spoken by more than one hundred million speakers.

Kezilahabi's poetry is seminal not only in its form but also in its content, giving voice to new, more individualistic and Western-educated Tanzanians, at the same time being connected to ordinary people due to the usage of Swahili. Kezilahabi's literature is also significant for the way it discusses philosophical ideas and conveys philosophy through fiction. #