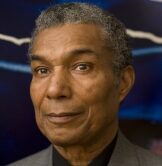 Corsino Fortes's first book Pão & Fonema [Bread & Phoneme] which appeared in 1974 made an immediate impact. 1974 was a momentous year for Portugal and its African colonies as it was the year in which Portugal's dictator Salazar was overthrown, an act which began the process that led to the decolonisation of the Cape Verde Islands in 1975.

Pão & Fonema is a compressed, intensely lyrical book, and yet it has an epic arc which maps out a very Cape Verdean odyssey. The first canto focuses on the islands' typical hardships, such as droughts, and the second on the Cape Verdean experience of emigration. The poem sequence 'Postcards from the High Seas' is from the second canto. The third canto looks forward to an independent Cape Verde where islanders can settle and build the country.

Fortes was born in 1933 in Mindelo on Cape Verde's São Vicente island. He has worked as a teacher and a lawyer; he served as Cape Verde's ambassador to Portugal; and he was a judge in Angola.