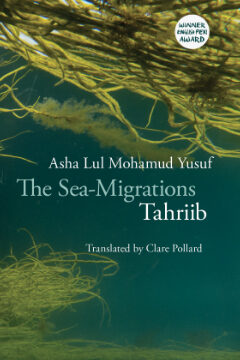 Declaiming this poem, a gabay, I alliterate in D to start debate,
to disseminate, to disclose to you: the public.
Hey, you - be diligent! I'm trying though it's difficult
to destroy the injustice, demolish the status quo.
Sea-migration disables my people, I want to drive it back.
I can't endure what's happening, it's like I feel the damage,
my body jerks, distressed, every time I see them desolate,
tears stream down my face, I chew blood from my lips.
All Africa has dilemmas, there are always disputes
but in this distressed continent, Somalis sink down to the bottom.
Their hearts only detest, they have rusted and deadened.
Love for their country's disappeared, they self-destruct.
The conscience has departed, the compassion is mislaid
in a trap laid by others; they act despite their interests.
Acts seem pre-determined; we're destined to be like Palestine.
People don't give a damn, civilian deaths hold no interest.
The dealer and middleman draw the deadly game out.
If people abandon their homes and decamp by boat,
hurt by discrimination, unable to stand delay;
if thugs dispossess and murder, and there's disaster and drought;
if dust-storms blow, dispersing infection and plague;
if children make a dash, the elderly decide to go -
then my people, I demand: who'll stay behind in our country?
Interesting question I've asked, isn't it?  A matter to consider.
Look at the hoards of women, all the young who drown,
all those deprived of life's basics, adrift outside their country:
our future floats bloated in sea, is a corpse dragged on sand.
They are devoured, picked dry by sharks and sea creatures,
wild dogs eat them like darib, the best camel fat,
and many dead bodies lie decaying on our shores
defiled by strangers' eyes, skin peeled off their carcasses,
their lives end in distress, and there will be no decent burial.
My people are dull with greed, they get-rich-or-die-trying.
We are filled with bewilderment, disordered and backbiting.
A state that can't read, a reactionary herd,
we only do well at begging, pleading for dollars and food.
We are snared in a cycle, in endless poverty ...
Declaiming these lines, I am undoing the camel's hobble,
Allah has raised me here, so I can draw open the curtains.
Decades ago, poets first stated the truth of this debate:
they devised a chain of poems, which we called the Deelley.*
And I've drafted this poem, and I add it to the chain:
let us use words as a prayer, let the advice be followed.
Let us tread Allah's path, devote ourselves to his order.
Oh, deathless Allah! Change us before we are destroyed!
Let me not drag out my poem, but deliver an ending:
if we cultivate our land, if we dig in our crops,
if we discern our natural wealth, and the rich, deep ocean,
the mountains Allah has made for us, ready to be mined,
the fossil fuel that drips in the dark underground,
the mineral deposits, the reserves of gold,
the domestic animals, milked to fill milk-jugs,
if we develop our people, in knowledge and faith,
the country has abundance, let us return and reside.
Let us purge demons, dispose of devils and their deeds -
we have not used our resources, let's do it now.