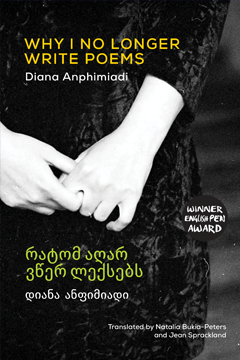 The Language of Gestures is featured in Why I No Longer Write Poems.
Buy now

We were very lucky to have Natalia Bukia-Peters in our workshop, who recently put together the collection A House with no Doors: Ten Georgian Women Poets with Victoria Field, and brought in two examples of young female writers. She began by explaining some fascinating facts about the Georgian – for example, the Georgian alphabet is one of only 13 existing in the world. This poem is by Diana Anphimiadi, a poet who is also a linguist, and whose often complex poetry foregrounds language.

Natalia also told us Georgian is a kind of ‘synthetic language’ where everything happens in the verb – very difficult for translators when one word in Georgian can need seven in English! And interestingly, a lot of our discussion about this poem focused on the verbs. Should the air be kneaded, plastered or flattened? Should the ‘phrase of song’ hack, chop, scythe or cut? (we wanted something substantial but also effortless). The Georgian word for understand also carries the meaning of ‘hear’, so we struggled back and forth for some time deciding which of these to use. This is a poem about what cannot be said in words, and heightened my sense of what is lost – in song, in understanding – when we translate.

Other poems by Diana Anphimiadi

Other poems in Georgian

Other poems from Georgia