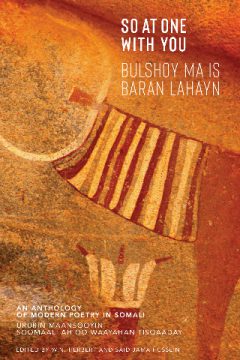 Society is featured in So At One With You.
Buy now

Wise council: you're unobtainable!
Blame: you breed without bounds!
Greed: you are unbridled!
Brave horse: you're hamstrung here!
Brute force: you bare your brainless face!
Sea of disorder: your full volume,
your ebb and flow and breadth -
could I scoop you in this cup?
Your vastness and your breakers -
are you emptied with a beaker?
But let me set this beginning aside.
The conch shell hot with bewailing,
its bray causing sudden shock
bringing the people together at once -
who does the fan blast with chaff?
Who has had the fear put into them?
Who is setting the traps in Xargaga,
the hunting pits of the Cannibal Queen?
Here comes Bullaale, threatening death
to provoke Bahdoon, walking slowly
with a branch of dogbane;
the fig tree is laid between them to mark
a peaceful zone - but he dodges by
so there's no escape.
In the open they find each other
and their bows are busy with arrows
aimed at the body's bullseye.
The oryx has to watch them brawl
and where is there any sanctuary,
where is there salvation?
Calamity is capable of wonders:
it blows everything out of proportion:
the man causing it bloats with pride -
and you call this normal?
My people: there is such a thing as society!
To the one who says you have no choice,
reply, 'You have no clue!'
Don't listen to his braying,
don't give him the time of day!
The one who promised you much
and ducked the responsibility you gave him,
turned aside from your goals,
robbed you when you were poor,
belittled your beggarliness;
while you lacked even the basics,
this one, craving all comforts,
sported the thick skin of the lion,
wore hubris like a mane,
jumped up into the sky
boasting about his superiority -
he can't stay up the mountain forever
nor can he delay his death-day:
his fall will break both shinbone and thigh.
Rage at how contrary this has run;
say that it shall be recorded well.
You, the people, chose me:
you made your bed in my soul,
wrapped yourselves in my conviction,
used my heart as your pillow.
It's you who make my lips move:
my fear at your fortunes,
my care at your conditions,
this is what matures me -
when someone defrauds you,
when you cry out for help,
a keen longing awakens my senses
and I begin to recite verse.
You, the people, chose me:
you granted me good fortune,
loaded me with luck:
if my brazenness burns like an iron
you bestowed that charisma on me;
you ordered me: be purposeful,
compelled me to battle for you.
If disasters hadn't befallen you,
your best interests not been betrayed,
if your homeland hadn't burned,
justice not been discarded,
the worth of schooling not belittled
being reduced to slogans,
would I be so at one with you?
If the fattest ram and the young lambs
had not been slaughtered for him,
the one who has devoured your house and home,
if more had not been bestowed on him
while the poor increased in number,
if a scant hundred had not risen to the top;
land which formerly had farms
not been put through hardship,
its crops and vegetation razed;
people who once were prosperous
had watered milk poured out for them
their wealth exchanged for pauper-hood;
if aid's grain had not been bickered over,
nor eaten with water in place of ghee;
if the man brought low with poverty
did not have to say, 'We are content!'
be obliged to lie for his life,
would I be so at one with you?
If shame and wrath were not visited on you
at the breaking of each dawn;
if you were not promised better news
would always be here tomorrow
and your needs were never met today;
if the dance of desire, Baar-caddaa
and its refrain 'Baloolliyo Badowyallay'
was not balm for your soul;
if clannishness had not been brushed down
and trotted out yet again;
if your banding together,
your sharing and solidarity,
had not been bludgeoned apart,
your home not burgled, and the sick
in their beds not loathed
and left to heal themselves
would I be so at one with you?
If the young were not butchered,
the blade not stained with blood;
the one who takes care of you at the end
not breakfast for the vultures;
the brave one who seeks to save you
not dragged down by wild beasts;
if those whose safety should be sanctioned
were not riddled with bullets,
the wolves racing each other to reach them;
if those who should be grieving
were not forced to rejoice -
and this show of joy worn as a charm;
if whoever remained alive had not
fallen under the rule of the gun,
becoming thick-skinned to pain,
would I be so at one with you?
If the land had not been scorched
by neglect and lack of water;
if Benadir, once bountiful, was not
now looked upon with pity;
if at dawn the refugees did not
flee in waves, great numbers
making for the holy sites;
if petrol was not fetishised;
if even the country girls
who used to wear fine poplin
were not abused now in Bahrain;
if the country had not gone
a thousand times begging
to the Arab kings, to the feathered emirs
would I be so at one with you?
If the Eastern bloc had not abandoned us,
the West not lured us to perdition;
had we not become a weeping boil
to our neighbouring nations;
even the fabled white-winged crows
seeking a bolt-hole to avoid
our lost folk, scattered across the globe;
if it was not said to our wounded
and our injured, 'You deserve it!'
would I be so at one with you?