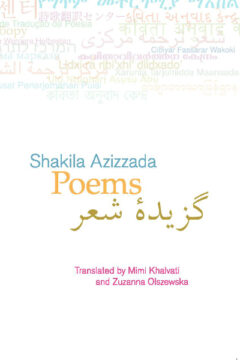 Recitation: this poem alludes to the many girls killed during the civil war in Kabul, 1992-1996.

Notes on the literal translation:

[1] This poem describes a fictional mourning scene, but refers to one of the many girls killed during the civil war in Kabul from 1992-96. The girl's name is Nazi. Shakila realises that Nazi has very different connotations to Europeans, so she says we might change it to Nazanin or something else, she will think about it.

[2] An interjection suggesting annoyance, the abbreviation of "La ilaha illa Allah wa Muhammad rasoul Allah" (the Muslim shahada, meaning ‘There is no God but God and Muhammad is His Prophet'). Most of those who say it don't realise that the first part just means "There is no God" so in fact they are being blasphemous in their moment of annoyance; it is a very common phrase. In this poem, however, it is taken literally by the mother (and the poet) who are so distraught and angry because of the death of the girl that they are prepared to question the existence of God.

[3] This scene describes the typical mourning lament of an Afghan mother - throwing her hands up in anger at the world, hitting her own head, tearing her hair out.

[4] A reference to the person who is responsible for burning espand at the funeral, a herb believed to ward off the evil eye, disease and misfortune. It is usually circled around someone's head but in this case, it is the head of the espandi woman which is turning.

Other poems by Shakila Azizzada

Other poems in Dari

Other poems from Afghanistan