Part of: World Poets’ Tour 2008 Farzaneh Khojandi, Gaarriye and the poetry of Kajal Ahmad with Choman Hardi at the BayLit festival 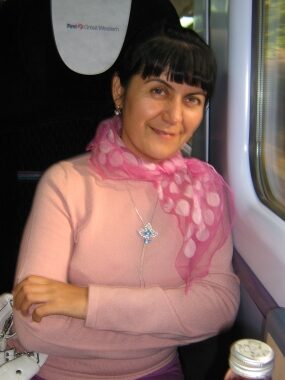 An audience of around 30 people came to the reading at Kemi's Café, Craft in the Bay, to hear readings by Farzaneh Khojandi (with her translator Narguess Farzad) and Gaarriye, plus the poetry of Kajal Ahmad, which was read by Choman Hardi.

Many people in the audience were members of the local Somali community association who took Gaarriye out for dinner after the reading. They were all thrilled to see him and were very grateful to us for arranging his visit to Cardiff, home to one of the oldest and largest Somali communities in the UK.

You can read more about the Somali community in Cardiff in this article in on Guardian Online.

The event was recorded by BBC Radio Wales who also interviewed the poets and translators. Evaluation forms gathered from the audience showed that the reading was enjoyed by everyone who attended.

Charles Beckett wrote a blog about this event.

You can listen to a podcast made by Guardian Books of Farzaneh Khojandi and Jo Shapcott discussing their poems and translations.