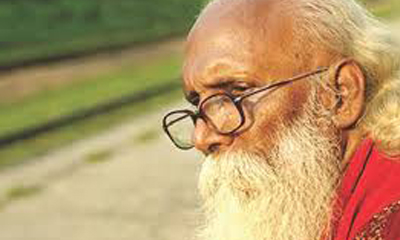 Nirmalendu Goon (born 1945) is one of the most popular Bangladeshi poets known for his accessible verse. He was born in Kashbon in Barhatta in Netrokona, undivided India, present-day Bangladesh. Part of the generation of poets of 1960s, Goon's poetry contains stinging criticism of the nouveau riche and a touching description of the contrasting fate of the masses.

An avowed Marxist, Goon has also written poems urging an upheaval of the poor against the rich. He also has written a number of poems on important personalities, including Rabindranath, Sheikh Mujib, Lenin, Shakti Chattopadhyay and others.

Shamim Azad is a British bilingual poet, storyteller and writer of Bangladeshi origin. Azad’s work ranges from Bangladeshi to European folktales. Her performance fuses the lines between education and entertainment and her workshops are rooted in Asian folk, oral traditions and heritage.

Azad has published books including novels, collections of short stories, essays and poems in both English and Bangla and has been included in various anthologies including British South Asian Poetry, My Birth Was Not In Vain, Velocity, Emlit Project and Mother Tongues. She wrote two plays for Half Moon Theatre.

Buy a Season Pass for all 6 winter workshops in this season and save money.