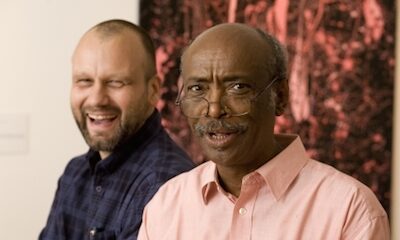 My role in this process was to provide literal translations and as much information as possible to Bill Herbert in order for him to make his versions of the translations of a selection of Gaarriye's poems. Unfortunately, time was very limited when I started working with Bill, so I also began to work up my own versions and the final versions for publication in the chapbook and for reading on tour were co-versions, the result of myself and Bill working closely together.

The first step was to select poems for translation which I did in association with Maxamed Xasan 'Alto' and Gaarriye. I chose poems which were both accessible to an English-speaking audience and which were representative of Gaarriye's oeuvre. 'Seer' deals with poetry itself and the figure of the poet, an important topic in its own right but one which has particular resonance given the importance of poetry to social and political discourse among the Somalis and the responsibilities resting on the shoulders of poets because of this. 'Arrogance'and 'Self-Misunderstood'are examples of poems which address more philosophical matters, humanity in the world, and the self, both physically and psychologically. Finally 'Death of a Princess' is an example of the international outlook of some of Gaarriye's poetry and his engagement with injustice and social issues.

Turning to the process of translation, this, for me, is essentially an intense, deep reading of a poem. When I produce literal translations for others the process is different from when I'm making translations to work on by myself. However, in both instances, the basis is as full an understanding of the poem as possible. This is an understanding not just of what the words mean, but includes a feeling of how the language flows across the syntax, alliteration and metre and how these three interact with the ideas, images and metaphors of the poem. At this stage, given the limited lexicographical tools and the fact that I am not a mother-tongue speaker of the language, I always work with Somalis who know the poetry being translated. In this case I am very grateful to Gaarriye himself, with whom I worked over a couple of weeks in Hargeysa and also to Maxamed Xasan 'Alto' whose help in London was invaluable throughout the whole translation process. Mustafe Khayre and Cabdikariim 'Qurusdoon' were also helpful with some points during discussions in Hargeysa.

Once this full understanding is achieved there's a sense in which the words get up off the page and dance. When working on my own, I try to filter the words through the medium of English so that English words come to rest on the page dancing to as close a tune as possible to the original.

Making literal translations in preparation for versions to which someone else is to bring their aesthetic sensitivities, however, involves a different approach. Firstly, decisions need to be made with regard to rendering the meaning of each word. This is particularly difficult when images and metaphors are based on cultural specificities with no equivalent in English. An example in 'Seer' is the two lines Caws baar leh weeyaan / Lana baxay sabool-diid. These two lines are so dense with meaning that they required the following additional notes:

This refers to a grass mat with unfinished frills (The women make mats which are used to cover the framework of sticks forming the nomadic hut, the aqal. A new mat is always made for the marriage hut, one that's larger than normal. It' this kind of mat that's referred to here.)

That is called 'the one who refuses the poor man' (This name is given to the mat being made. It is a valuable thing which is not used as part of a bride's wealth for just anyone, but for a man of some wealth.)

The whole image is a metaphor for poetry itself.
In teasing out these lines I was trying to bring enough out for Bill to make his own version. His final version was: 'It is the finest matting, woven for a bride, / the one the song calls "Refuser of poor suitors"'. This succeeds in bringing the essentials of the metaphor out, although the line is inevitably longer and thus the compromise is to lose some of the concise feel of the original.

Decisions as to how to convey each word are made all the time at this stage. There's often a choice and, for a literal translation, the one which most closely coincides with the actual meaning in my mind is the one that I tend to choose, although I do also occasionally give more than one possibility (consider/look carefully, glance/look). Many words were of course subsequently discussed; with Bill, this was done mostly by sitting together and bringing alternatives forward, which I'd consider in relation to the original so as to make sure that the meaning and tone of the original were not being lost.

What's much more difficult to convey in a literal translation is the feel of the interaction between syntax, metre and alliteration which are fundamental stylistic characteristics of Somali poetry of all genres and which lend so much to how a poem is perceived by the listener. This feel is something which comes with a knowledge of the poetic tradition and lots of listening and reading of poetry. In order that he might have some insight into this I gave articles on Somali poetry in which some of the basics of metrical system and alliteration are explained. The way in which different syntactic constructions in conjunction with the metre create a sense of the flow of the language through sections of a poem, is something that's not really been written about; however, I tried to convey this as best I could in my literal translations and in the discussions Bill and I had together.

A simple example of this is the position of the verb. The basic position for the verb in Somali is at the end of the clause, unlike English, and this fact is used in poetry to create sections which hold together in subtle ways, either through parallelism or through extended use of subordinate clauses or nominal phrases leading to a main verb. An example is the lines in 'Arrogance'Onkodkiyo hillaaciyo / Ufadaa dhacaysiyo / Uurada waraysoo, which I rendered in the literal translation as follows: 'The thunder and the lightning and / The ufo wind which has blown and (Ufo is a particular wind which blows when it rains) / The grey cloud, question them.' To this last line I added the note:

Lit: interview them, or take them into consideration for yourselves. Better English would put the verb at the beginning of these lines: Question the thunder...the grey cloud. This doesn't get some of the movement of the Somali here though, especially given the jiifto metrical pattern which is used here.'

The final version made by Bill and myself of these lines is as follows: 'Ask the thunder, see what lightning says, / the rain-bearing wind which blows / the good grey cloud, ask them.' The use of the verb at the beginning of the clause is much more natural in English, particularly as it is an imperative, but this is balanced by its repetition at the end. We used the syntax of English while still nodding to the original and rounding off the line group with a verb.

Note also that in the literal version I kept the line-end conjunctions which would be odd in English poetry. This, however, is a distinctive feature of poetry made in this particular metrical pattern and thus, in the literal translation, I felt it was important to keep them in order to hint at this. This was particularly striking when contrast is made with 'Death of a Princess' that's made in the shorter maqalay warlaay metre in which such conjunctions at the end of the line are much rarer. This hinting at the characteristic feel of each metrical type is important, in my opinion, since it's intimately connected to the flow of ideas.

Bill was very responsive to and respectful of the originals as presented in the literal translations during our intensive meetings over three or four weekends. Given the limited time left to us, we both began to work up versions which then came together and resulted in the final versions. Bill was very keen to understand as much as possible of each of the images used and the vivid impression given by Gaarriye's often striking use of metaphor and imagery comes through in our final versions. We were tweaking the translations up to the end, I recall this being particularly so in 'Death of a Princess' in which the religious references are used subtly to highlight the inhumanity of the killing of the princess. I recall, for example, a late discussion we had relating to the difference between 'the centre of divine revelation' as against 'the centre of the divine revelation', a reference to the Hijaz. This discussion, I think, was conducted while Bill was at the airport waiting for a plane to Crete and the final proofs came through to me in Istanbul on my way to Syria.