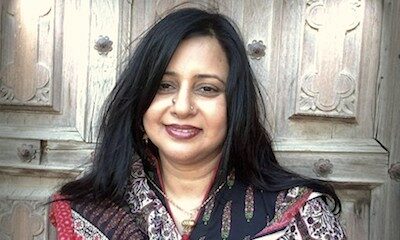 Preparing the literal translations of Noshi's poems was a real challenge for me. This is not simply due to the fact that she is writing in Urdu, but her choice of complex imagery and ideas made translating her poems into English extremely difficult. In addition, the brevity of her poems embodied the intensity of her emotions, and this was one of the qualities of her poetry that I definitely wanted to translate into English.

A beautiful example of her writing style is the poem ‘There was a Heart that burnt out: Light', which both Lavinia and I found fascinating to translate. This poem is written as if the poet is in dialogue with light, nature and perhaps god, as indicated in the first couplet:
There was a hear that burnt out: light
Light O god, O god light

This idea of being in constant communication with nature, light/god, is wonderfully captured in the final version of the poem by Lavinia by emphasizing the word ‘light' at the end of most of the lines. Another layer of the poem unravels in the final line where the poet finds herself in a state of paradox; chasing light and yet continuing to exist in darkness. This paradoxical nature of her existence has almost transformed into a curse in her life which she aims to share with the readers.

There are many other poems which reflect Noshi's passion for playing with paradoxical symbolism and creating ambiguities. For instance, the poem ‘The Breeze Rewrites' combines the obscure invisibility of the breeze with its power to write whatever she desires to write. In this poem, the breeze can be observed as the personification of the poet who feels as free as the breeze when she starts writing poetry. Most of the poems express love/hate, imprisonment/freedom, real/imaginative binaries. I find this aspect of her poems is the most difficult to translate into English and I struggled hard to find the appropriate words to convey these conflicting ideas.

Another aspect of Noshi's poems that I found particularly difficult to translate was following her rhyme scheme. Most of the poems are written in free verse but the ones which had rhyming words at the end of the couplets were virtually impossible to be replaced by rhyming words in English. The best example of Noshi's rhyme scheme is ‘The flower is torn at the heart'. In the original poem every second line of each couplet closes with rhyming words. The words she uses are: yari hai( line 2), guzari hai (line 4), ikhtiari hai (line 6), bari hai (line 8) intezari hai (line 10), tari hai (libne 12) and hamari hai (line 14), yet to translate these words into English and also maintain their rhyme was virtually impossible for me. The way I tackled this situation was to maintain the overall musicality of her poem, its theme and imagery.

Imagery and symbolism are the most crucial aspect of Noshi's poetry; indeed, she blends them together which has the effect of loading each line with several images, making her expression further convoluted. For instance in these lines from her poem ‘This Prisoner Breathes' :
I am trapped in a jungle of voices
In which I cannot spread my wings

These lines present the best example of the conflict that I faced as a literal translator. The first thing that struck me about this opening couplet was whether to translate ‘jungle of voices' as ‘world' which could be Noshi's possible idea or just maintain the original symbols. I experienced this conflicting feeling in most of her poems but in the end I preferred to exactly translate her original symbolism into English and leave it to the readers to interpret the poem as they wished to.

Later in the same poem, she writes:
Yet you set fire to the boat carrying my feelings
Surround this sea of feeling with desert sand

This is one example of Noshi's complexity of expression and the reader wonders how can a boat carry feelings? Or how did sea, desert sand and fire combine to frustrate the poet? The jungle and desert could also be mystic symbols in her poems and it was therefore impossible to ignore them. Similarly, in this poem there are further complex examples where Noshi loads the line with difficult images, such as her idea of stitching the eyelashes and terrorising the feet with faceless chains. For the literal versions, I felt I had to unpack these complex ideas and make them more comprehensible for the English-speaking reader. This issue has been expertly dealt by Lavinia after our discussions and by reshuffling these lines to capture the sense of the poem.

Finally, translating the shortest possible poems by Noshi was another interesting experience for me. These poems either constitute a couplet or several lines as her poem Kashf (‘Insight') and Mausamoon ki tubdeeli (‘A Change of Season'). The excitement of translating the poems as short as three or six lines and the strain of capturing the intensity of the poet's emotions was an ordeal for me in both these poems. In Kashf the ominous sense of Noshi's fear in the original poem, the fear that wherever she glances, something goes wrong had to be conveyed in English. In the second poem, the mystery of changing seasons, the islands of fear, the pain in her eyes and the light in them was my concern which would have gone missing if I had failed to find the equivalent word in English.

In the end, after going through various stages of working on these translations, it was a very rewarding experience for me. Despite knowing both Urdu and English languages proficiently, I discovered the musicality and complexity of both these languages which we perhaps overlook in our everyday spoken and written experiences. This experience also deepened my love for poetry as the most appealing form of creative expression and my interest in translation as a way of creating a bridge between cultures.