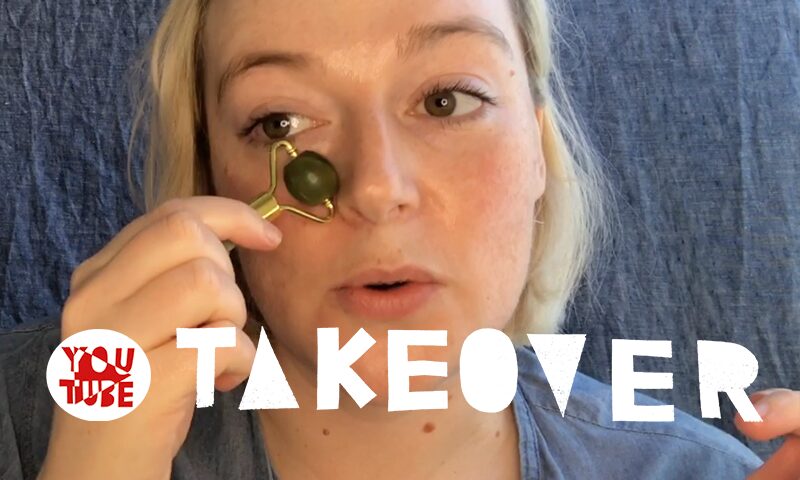 Ella Frears is a poet and visual artist based in London. She’s had work published in the LRB, Ambit, and Poetry London among others and currently has poems on show at Tate St Ives. She has been Poet in Residence at Tate Britain, the National Trust and Royal Holloway University physics department where she was writing about the Cassini Spacecraft. Ella was a finalist for the Arts Foundation Poetry Fellowship and was commended in the National Poetry Competition 2019. Her first collection is Shine, Darling (Offord Road Books 2020).

Frears is responding to 'My Tenantless Body' a collection of the work Chinese poet Yu Yoyo, translated by the poet AK Blakemore and the editor Dave Haysom.

In the first of a series of videos in a sequence called 'Getting Ready for Nothing' Ella Frears washes her face and gets ready for the week ahead, she will be taking the visual language of the Online Makeup tutorial and repurposing it to talk about the work of poet Yu Yoyo.

In this intro she beaks down how these videos read Yu Yoyo's poems through the prism of the Covid-19 crisis and lockdown. She says "As more and more of the world announces it’s on lockdown, and we begin to move our lives online more decisively (for a bit at least), I’ve felt these poems slide into focus - they’ve sharpened for me. The language and tone that seemed so distant and surreal on first reading is now drawing closer to my thoughts and feelings, to the tensions surfacing across the screens I spend all day gazing into. The air on the page coalescing with that of my living room."

In this video, Frears discusses getting to grip with the tone of Yu Yoyo's poems which she describes as the 'distinct tone of someone who is tired of your shit, but doesn’t want you to leave.' She digs in to interviews with the poet AK Blakemore, who translated Yoyo with Dave Haysome for the PTC in 2019, to see how they tried to perceive the tone and depth of the originals.

In the video, Frears talks about Yoyo's work noting "Throughout the poems, there’s a sense that she’s performing a very particular kind of femaleness, youthfulness (one I would argue, though everyone recognises, no one has actually met)- the first poem of the book is titled ‘when i grow up i want to be a girl’"

In this video 'Hydrate' Frears talks about the water imagery in Yu Yoyo's work. "Water is as sensual as the bodies of other women, and can elicit as much jealousy. It’s water that has the final word. In fact, is the final word of the book: fewer and fewer people in the city/gradually replaced//by an expanse of water At first I read this literally, imagined a submerged city, people and buildings melting, replaced. Now, on lockdown, as I feed bits myself to the internet, I wonder whether this is the expanse of water we are collectively becoming. "

Frears says "Yu Yoyo mixes the surreal and the real using the poetics of dreams to distance herself from the self within the text. A. K. Blakemore says ‘The surreality of poetry gives you a level of plausible deniability – particularly as women writers.’"

"The more I read these poems the funnier I found them." says Frears and talking about Yoyo's work "That’s not to say there isn’t darkness, trauma, difficult themes within the work. But I think there’s a lot of humour in there. ‘i find myself funny’ writes Yu Yoyo in her poem ‘Stay’. Which is a funny line. I also read it as a message to the reader - lighten up. She may be writing about death and loneliness and bad sex and violence but she’s also writing about having relations with a ferry boat, or travelling to rescue her drowning ears."

In the last of her video series 'Getting Ready for Nothing' the poet and artist finishes putting on her makeup and talks about the experience of reading Chinese poet Yu Yoyo's work in the context of the Covid-19 crisis and near-global lockdown. 'I do think it’s an interesting phenomenon when something seemingly static like a book can shift for the reader so that it appears to reflect a present it couldn’t possibly have foreseen in a place far away from where it was written. ' she says.

Then, after recounting a true-life tale of an online women's Zumba class hacked and attacked by real-world Nazis, Frears leaves us on a note of hope: When I watch films of people rubbing various creams and serums into their faces with a little jade roller, I feel better, less panicky, less shut-in. I love the idea that after these films, the person with their beautifully put together face goes nowhere. That instead of preparing for an event, the process was the event.

The PTC YouTube Takeover credits were animated by Bern Roche Farrelly and the theme tune 'Elephant Juice' was composed by Natasha Sutton Williams.