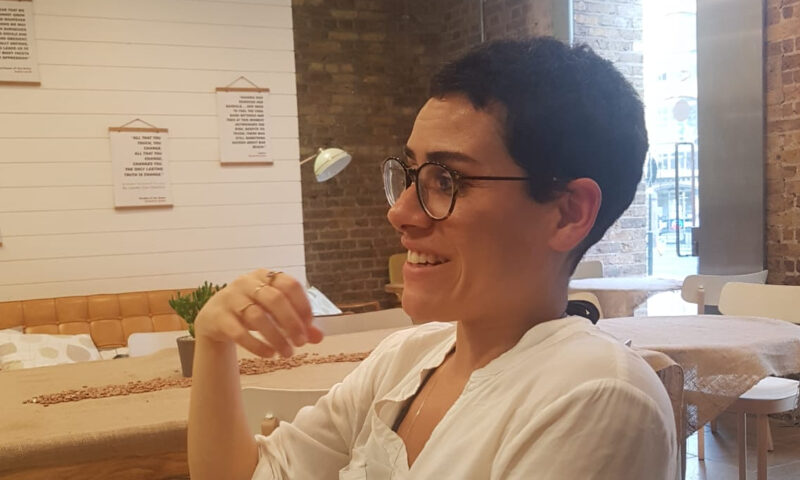 Writer Tice Cin interviewed her at Free Word last month and here’s the conversation that followed:

What's been the highlight of your time touring with the PTC so far?

I really appreciate having a platform to talk about things that are important to me and to my communities so I am always so grateful, and humbled, to sit and have like fifty people who are listening not only to the poem but also to issues such as poetry and activism, or feminism.

We are silenced all the time so when all of a sudden there are people listening, it’s a very good feeling of making peace with poetry again and seeing that it is helpful. When language is used at its best you can have harmony between a large number of people.

What was it like to have your poem 'the elephant' responded to by the young poets of the Octavia collective?

It was so nice and I was very moved. Especially at the gesture, and the generosity of being read. That’s something that always moves me, knowing that people read my work. It’s like ‘oh you did?! Wow thank you!’ It’s nice to be constantly surprised by the feeling of being read by someone, it’s a feeling I hope never to lose.

They were amazing. Destiny Adeyemi’s for example, the idea was brilliant. She went exactly to the person who interested me the least in the whole poem and wrote about them. It was so nice when I heard her response because I was like ‘ohh now I know who that guy is’. It was like saying hello to them for the first time. Destiny is 19 years old! She has it all already.

[Read all of the Octavia collective's response poem to Adelaide's Poem 'the elephant' here. ]

The porn industry can be extremely homophobic, transphobic, misogynistic and violent. So we started trying to make selections that show our position, in the sense, we never published a poem that commented on pornography but through the selection process we would try to make clear that we believe that there’s something wrong going on – while also considering that sex and sometimes hard-core sex and its portrayal can be fun for many women, including cis women. We were careful with the contributors we invited, trying to get away from the centres – for example publishing people from outside Rio de Janeiro and São Paulo, and as many womxn of colour, especially queer womxn of colour as possible.

The debate over pornography and sex work is highly moralistic. I think it's super important to rebel against this and try to be ‘materialistic’ and to see in history and throughout history, the context in which those things developed. My wish is to try and be less moralistic – other authors and writers would say that fetishized sexuality is a way of overcoming trauma. It can be liberating.

There is a lady called Jodi Dean from the United States and she is a hard materialist, she goes into this direction, using psychoanalysis to take the question of morality away from these types of discussions. The point is the self-determination of people, how they relate to sexuality and how they relate to the things around them.

How do you think poetry and activism relate to one another?

That’s a question I really like answering and think a lot about. Since the coup in Brazil in 2016, I had a crisis with that. Of course, I was very disappointed with what was happening in Brazil after having almost 20 years of progressive social justice oriented centre left-ish or centre oriented government who were concerned about the common people. For me, it was very weird to see not only how fast things can change, but also go in the complete opposite direction, politically.

In a very liberal, clichéd way I was asking questions such as ‘what’s poetry for in a world where everything changes in a bad direction so fast?’ Yet at the same time, I knew the problem wasn’t my poetry but that I needed to be asking the right questions. I was saved by a series of coincidences. The more theory I read, especially Marxist theory, theory from Marxist activists, grassroots activists who were also organising – I got to see how they were using poetry to ground, or give context, to their thinking.

Poetry is being written in books but also it is coming alive in grassroots movements, in slams, in hip-hop clubs. I think that activists have a connection to poetry that felt healthy in that way. When I was reminded of poetry that comes through the body, in collective situations, it felt so true to me. Which is where I felt my question was answered, it’s not that poetry is not necessary; I just needed to be in a space where poetry was being ‘done’.

It can be very political in that sense too. It can build connections, whether through social movements or in collectives. I think there is a genealogy of poets who have been mixed into political events. For example, the Landless Workers Movement/ Movimento dos Trabalhadores Sem Terra in Brazil – they have their poets, people who sometimes can’t write or read but perform poetry.

Something I really love about activism circles is how people really celebrate when you say ‘oh, today I went to a couple of houses and gave out some leaflets about the elections’, and the group would be so thankful. Poetry needs more of this.

I’m 37 years old and I started trying to establish myself as an artist when I was 18 – that’s when it felt like my job in life, by the time I was 35 I had still not been invited to a festival in Brazil. It is easy to give up. Artists struggle to pay their bills. It breaks my heart. The work that we do has a cost for our bodies, minds and hearts. Sometimes our relationships also suffer because we have dedicated ourselves to this creative process. Sometimes the only thing you get back is that nothing bad happens, or nothing good.

I think it’s sad when people react so extremely to bad books; it’s only a book. Or how people expect that poets have the right type of politics non-stop. It’s a pity because there’s a discrepancy between more academic ideas around the right language being used and how people actually speak at a grass-roots level.

Your photo reportage and journalistic work shines lights on political, historical and cultural events that are often untold. What's your advice to creatives trying to research for their work?

Of course, I read a lot but I think the most important tool for me is interviewing people and reading comments on the Internet. Yesterday I was kind of talking to Ed [Doegar, the PTC’s Commissioning Editor] about this. We were talking about poetic traditions and how we are not part of a poetic tradition yet because usually other people come along and categorise your work.

When I was walking back to my hotel I was thinking that, probably, mine would be some kind of tradition of writers forming their work from internet language – because a lot of my research happens on the Internet. It doesn’t happen that I look for PDFs of Freud or Marx; it’s more that I look at the comments on these articles.

This reminds me of Gramsci, the founder of the Italian communist party, he’s a very smart man and his approach to Marxism was very fresh. While in prison, he wrote a lot about hegemonic narratives and how culture creates ideology and how it’s the base of forces in power. He talks a lot about common sense, common sense which would be what everybody knows, what your grandmother knows because her grandmother taught her, something there in everybody’s mouths and heads.

I think the common sense of our generation is generated from the Internet. On one hand, it doesn’t reflect how people interact in real life – it’s often a reflection of fake news – but on the other hand, it lets you into the underlying thoughts of people.

I also like conducting interviews a lot, and I’ve stopped paying for roaming data so that I can keep my eyes and ears open to people around me when I’m travelling or on the bus. It’s a super important tool for me. Also, because I’ve been living in exile for almost ten years, I don’t have as many friends as I used to have so I love to listen to people talking on the streets because more often than not, I am alone – so I have to keep this journalistic skill alive 24 hours a day.

Which poets do you think should be on everyone's radar?

When I was writing the hammer I was reading a lot of Anna Swir, a Polish poet who fought in the resistance against the Nazis. She was a bad ass. But also she loved sex, she had a very joyful relationship with her body and she wrote about sex and the body and love in a very joyful way, which is a nice contrapuntal shift to Anne Sexton, who I was also reading, who is heavier, with a Scorpio darkness. Then there’s Adília Lopes who is still alive, she publishes a book a year. She’s always been there in my life. Her poems are like origami, you think you’ve read it all and then you find something new – with very mysterious but also super simple language.

There’s a girl - also from Portugal - called Mafalda Sofia Gomes. She’s a young poet, I’ve recently read her things on the Internet and she’s never been published before (I think she’s 24 or 25). It’s quite amazing what she does with language. Very feminist. She comes from a small town in Portugal; she doesn’t come from the big cities. Her poetry is closely related to rural life, rural pace and timing, and relationships. It is very domestic and badass.

Of my contemporaries, I read so many Brazilian writers. Natasha Felix really blows my mind – also super young. She published a book last year.

I’ve been thinking recently of poetry readings from Kim Hyesoon. She has rhythm, elegance but also drama. She is like a Sphynx. Very still. When I perform I read loud, I use my hands and face so I wasn’t used to this. She has this power in quietness.

I also love Choman Hardi. I just got to know her work this year. Since being in London I’ve acquired a gigantic reading list too.