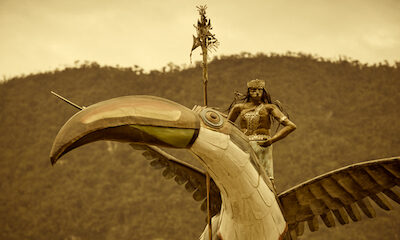 The Shuar are one of the largest Amazonian indigenous groups, with about 40,000 members in Ecuador (some also live in Peru). Given their relative isolation for most of their history and their former practices of headhunting, they have also been among the most studied by Westerners. Missionaries have long sought to Christianise the Shuar, and oil companies have long attempted to extract oil from the vast reserves that lie within their territories.

In spite of the many desires by Westerners to make contact with them, the Shuar had historically been adept at resisting most outside interference, helped in part by the Andes mountains to the west and the rapids of the rivers to the east. Some early studies showed that the Shuar had extremely high life expectancies averaging 120 years. However, over time, the ongoing contact with outsiders introduced disease. Increased colonisation and oil exploration displaced many Shuar. Lack of access to their traditional farming and hunting grounds affected their nutritional status and damaged their social relations.

Today, many Shuar practice a combination of Christianity and shamanism. The shaman healers use many traditional and sacred plants of the rainforest. María Clara Sharrupi's poetry sometimes mentions these plants. Her writing is vivid and colourful, as are the traditional garments of her people and the feathers of the macaws that fly through the skies of her native rainforest lands. Her writing evokes the Amazon.

María Clara's poetry includes numerous words that come from her native culture and language. Many of these concepts combine the natural world with the spiritual world, and seem quite foreign to people from non-Amazonian cultures. Her expressions also sometimes join two senses - for example, as in the scent of a song, something that might be easily understood in her culture but not in most Western ones.